Marukin enjoys a sterling reputation as one of the top five soy sauce brands in Japan. Along with its namesake soy sauce Marukin offers a range of soy-related seasonings as well. It is based on Shodo Island, among Japan's top four soy sauce production areas. In testimony to its high profile and popularity throughout Japan, Marukin is beloved across the country for its delicious flavor and high quality. 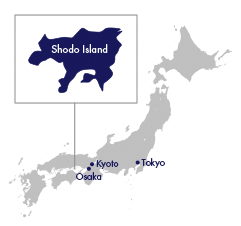 Marukin's products are manufactured at Morita's Shodo Island (Literally "The Island of Small Beans") soy brewery in the Seto Inland Sea in western Japan. This island is blessed with its beautiful ocean environs and bright sunlight orientation. It has a gentle climate that resembles the Mediterranean region in Europe evidenced too by a small, cottage olive industry taking root. It is frequented by many visitors who come to see this beautiful ocean, its highly varied coastlines; and lovely, rolling terrain. In recent years, this island has also become known as an artistic destination because of the contemporary art festival that is held on Shodo and nearby islands.

Soy sauce manufacturing came to Shodo Island around the year 1600. At that time the island served as a strategic way station for maritime transport. It was thus easy to obtain the salt, wheat, and soybeans used to make soy sauce despite its smallness and absence of local production. It was also in an advantageous position for shipping the finished soy sauce throughout the surrounding areas. Consequently, production of soy sauce products thrived on the island. Today, Shodo Island remains as one of Japan's top four soy sauce production areas.
As a result of severe competition and changing times, the Marukin brand was established in 1907, when several soy sauce manufacturers agreed to come together and form Marukin Shoyu Co., Ltd. with the aim of improved competitiveness, quality and modernization. The market for Marukin's products grew prodigiously as a result of their delicious taste and premum quality. Today, Marukin is now one of the five most renowned Japanese soy sauce brands.
To ensure continued growth and prosperity Marukin Shoyu and Morita merged, making the Marukin brand one of Morita Co., Ltd.'s portfolio stand-outs. Marukin's delicious, high-quality products continue to be made today following traditional methods cultivated through the past 100 years and counting. 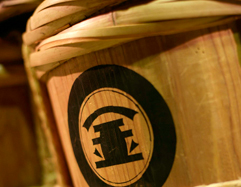 There are currently around 1,500 soy sauce manufacturers in Japan, most of which are small companies that only distribute products within their local areas. Marukin-regarded as one of the five most renowned Japanese soy sauce brands-is unique in that it distributes its products nationwide and abroad. In particular, it is embraced as the "native son" and beloved as the top brand within the Kansai region, including Osaka and Kyoto - the ancient capital of Japan where the country's UNESCO Intangible Cultural Asset food culture was born.

Naturally brewed and fermented by the Gods

The Shodo Island production brewery includes a natural fermentation "cellar" dating back to the early 1900's where the soy sauce is produced in approximately 300 wooden barrels made of Japanese Cedar. This facility-one of Japan's largest natural breweries-has a production capacity that comprises around 30% of the naturally brewed soy sauce made in wooden barrels in Japan.
As the soy sauce is brewed in century-old aged wooden barrels, it is fermented by the bacteria and yeasts that live naturally in the barrels and throughout the brewery. There, they are matured over a long span of time. In the 20th century, people have mostly abandoned such traditional Japanese techniques of production in favor of impersonal modernization and industrialization processes. At present only 1% of the total amount of soy sauce distributed in Japan is manufactured in the traditional way.
Yet, it can be said that the new ways have inured the palette and tongues of modern consumers. Marukin's precious, naturally brewed soy sauce possesses a flavor that cannot be imitated by other companies. It hearkens to early memories and forgotten pleasures that can only be produced through the optimum balance of resident bacteria and ambient yeasts in wooden barrels-cultivated over a period of 100 years-that are favorable for premium soy sauce brews.